Bird’s flying. It’s something that has made people envious and jealous for thousands of years. As birder’s we watch the birds fly for hours on end. As ornithologist’s we study how and why birds fly. And yet I question if we will ever truly understand it.

In ornithology classes, the Bernoulli Principle and what physics has to say in regards to explaining how birds can fly is taught. And yet, personally at least, it never really made sense. Until recently that is.

I went sailing for the first time with a friend over the summer. On the lakeshore, she told me all about how the sails and boat worked. She told me the conditions wanted for the best and fastest sail possible. And yet she never told me what it would feel like once we were sailing at the fastest speed we could reach. She didn’t tell me how thrilling it would be or how fast things could change. She didn’t tell me that it would help explain bird flight to me.

As we sailed, my friend tried to explain everything to me again now that things were actually happening. However, all I could do was realize that the things that were making us move thru the water were the same things that make birds fly. Suddenly, it all made sense as to why northernly winds were preferred for spring migration and southernly winds were preferred for fall migration. It had always seemed backwards to me. Weren’t those winds going in the opposite direction that you wanted to go? Isn’t a wind that pushes you more helpful? But birds fly and I was sailing, not riding a bike. The sails “sung” the loudest and we were going the fastest when we were going straight into the wind with hair in our faces and hands holding our hats down so they wouldn’t blow off into the water. 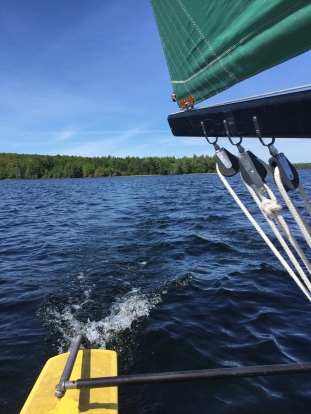 To be honest I don’t think I can truly explain the “how” of sailing or flying. Physics has never been my strong suit. But I can explain that the feeling was incredible. To move so efficiently and so swiftly all because of wind and only wind. It made the birds that can just soar endlessly in the air, the ones I’ve seen all my life, even more impressive to me. The buteos, the vultures, the gulls, the swifts and swallows and all the rest. They flap, they glide, they soar, they fly. And it is flight that will always be part of what makes birds so magical to me.